Green Alert: Lack of Recycling a Challenge at TAHS

The added cost of recycling and a lack of leadership at many levels of the school have made recycling something that is lacking at TAHS. 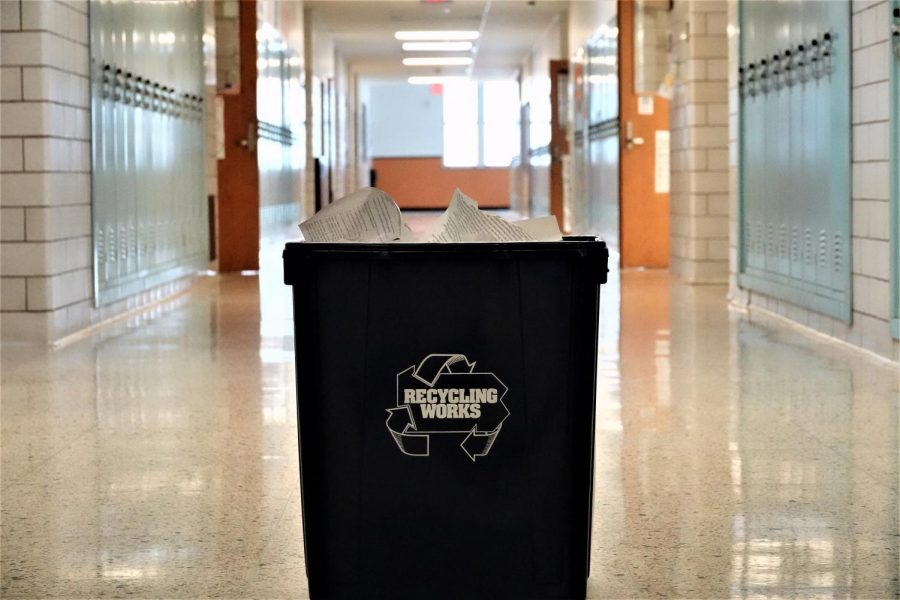 One of the few recycling bins at Tyrone High School is located in the copy room next to Mr. Wilson's classroom. The added cost of recycling and a lack of leadership at many levels of the school have made paper recycling something that is lacking at TAHS,

To recycle or not to recycle? In 2020 this shouldn’t really be a question, but surprisingly at Tyrone Area High School and many other rural schools across the state, it still is.

While TAHS currently does recycle cardboard, the only paper recycling containers in the school are in the copy rooms, which are inaccessible to most students. As a result, little of the 4.2 million sheets of paper used in the school each year are recycled.

In the United States, approximately one billion trees worth of paper are thrown away each year, and schools are among the leading contributors to this problem. According to the American Federation of Teachers (AFT), schools produce 4.7 pounds of waste per-student each day.

In a time of climate justice, it seems curious that Tyrone High School doesn’t make more of an effort to reduce its environmental impact through recycling.

While some schools across the area, like Altoona and Juniata Valley, have recycling programs, others still do not. The reasons for the lack of recycling at some area schools are complex.

According to John Fredrick, the former executive director of the Blair County Intermunicipal Relations Committee (IRC), the organization that oversees most of the recycling in the county, Pennsylvania law regarding school recycling is lax at best, and nearly impossible to enforce at its worst.

Mandatory recycling in Pennsylvania began in 1988 with the Municipal Waste Planning Recycling and Waste Reduction Act (commonly known as Act 101). This law requires cities and larger towns to recycle.

According to the State Department of Environmental Protection, 94 percent of the state’s population has access to recycling, but in rural areas and smaller municipalities like the one Tyrone High School is in, recycling is encouraged but not mandated.

However, Section 1509 of Act 101 requires all public and nonpublic schools in Pennsylvania, no matter where they are located, to have a recycling program. But according to Fredrick specific guidelines stipulated in the law have never been fully developed or enforced by the Department of Education.

“I was on the state-wide Solid Waste and Recycling Fund Advisory Committee for ten years and the committee had become frustrated with the Department of Education for their apparent lack of action on this,” said Fredrick.

“Trash is complicated, and a lot more complicated than people think,” said Frederick.

Tyrone Area School District Physical Plant Supervisor Jordan Good says that the biggest hurdles to having a paper recycling program at the high school are cost and student cooperation.

“[Recyling] used to be free…[but now] it is one more added cost to the district,” said Good. When asked what a recycling program would cost, Good did not cite a specific number, only that “it would be expensive.”

Another challenge with paper recycling is properly sorting paper and making sure that non-recyclables are not mixed in.

“All it takes is a piece of gum thrown into the bin to make it garbage,” said Good, “It’s a great idea but clearly is not an easy thing to get moving.”

Recycling at the high school has been implemented before, but it was never well received by the students. If students do not use the recycling containers properly, recycling becomes pointless.

“Recycling would need a push from the students,” said Good. “It would be a large change for the students to comply with the program. We can establish a program and the District can purchase the containers, but if the students do not use them properly then it is all for nothing.”

Fredrick disagrees that the change must begin with the students.

“[A recycling program] can start from the bottom, or the top, it just has to start somewhere,” said Fredrick.

Both Good and Frederick do agree on one point, recycling is a challenge that should be addressed by the school in the future.

The high school administration seems receptive to a recycling program if someone in the school steps up and gets it started.

“We are willing to get behind a program we just need a teacher to oversee it,” said High School Principal Tom Yoder.

While many are willing to get behind a recycling program it seems as if a lack of leadership and direction at both the student and administrative levels are currently in the way.

“If there wasn’t an initial cost followed by continued monthly costs we would start it and see how it went, but because this is an additional service we would pay for we will need buy-in to make it worth it,” said Good.

Students, for the most part, seem receptive to the idea of expanded recycling but are looking to the administration and teachers for leadership.

“There are students willing to do this,” says freshman Elizabeth Fryer. “[The administration] doesn’t push enough to make a change. I think we should do something. Even the smallest thing like have one recycling bin on each floor.”

One point everyone agrees on, it would be good to have recycling. But experts, students, and administration still disagree on one thing: how to get it done.