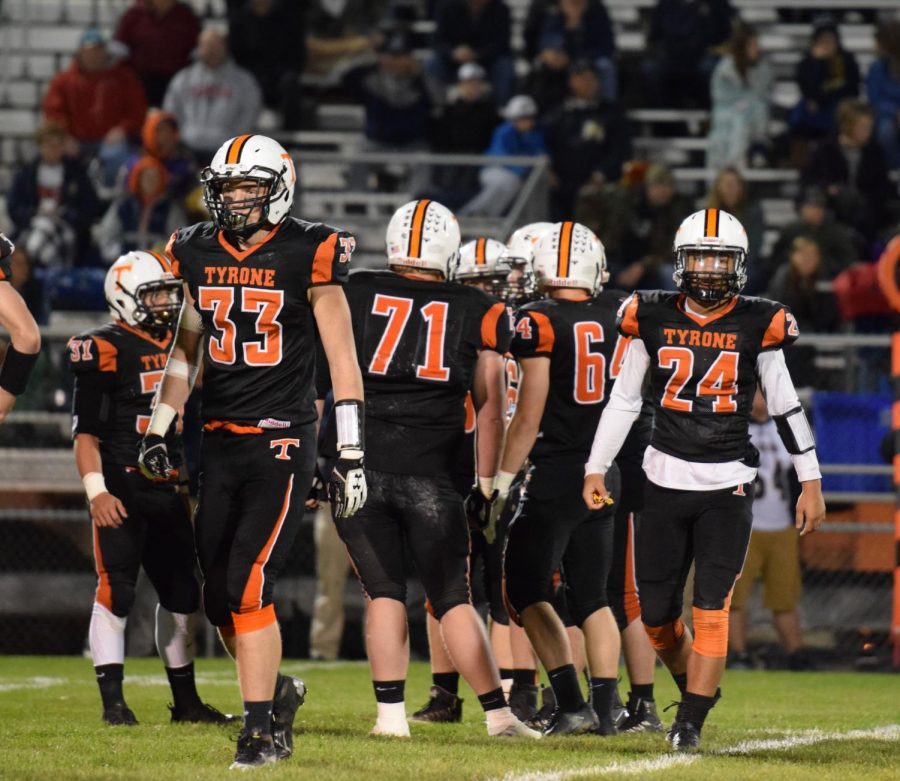 The Hollidaysburg Golden Tigers and the Tyrone Golden Eagles have more in common this season than just being “golden.”  Both teams started their seasons strong and are much better than their records indicate.

At 4-3 Tyrone had just faced three consecutive undefeated teams. Hollidaysburg had dropped four of their previous five games, but all to quality opponents with winning records. Both were hungry for a win.

Hollidaysburg ultimately outlasted the Eagles with a big second half, winning 28-13.

“We played well once again but had several mistakes that really hurt us and put us in bad situations that we’ve been talking about for the last couple weeks,” said Tyrone head coach Jason Wilson, “We moved the ball well on offense but couldn’t finish out drives. We forced several turnovers on defense but let them get several yards after contact. We need to clean things up as we finish the regular season out.”

For the Eagles, the first half went very well offensively and defensively. In the first quarter a pass caught by Tommy Hicks intended for Logan Reader lead to the Golden Eagles leading 7-0.

But the Tigers came right back on their first drive with a pass to Austin Weakland making the game 7-7.

The first half that was marred by turnovers on both sides, the teams went into the locker room at halftime knotted at 7.

In the second half the Tigers started pressuring Tyrone to put points on the board. The Tigers scored two touchdowns with Brady Walters running both in, raising the Tigers lead to 21-7.

Small mistakes would slowly hurt both teams. Such as turnovers and penalties, all together both teams would have a total of five turnovers, eight penalties, and lost 155 yards.

In the fourth quarter the Eagles started to show the signs of life. again. But only after the Tigers would give the ball to Nate Fischer for a 1 yard touchdown run.

With the Tigers leading 28-7 and time running out, the Eagles marched down field and quarterback Denver Light connected with Tommy Hicks for a 30 yard touchdown. But a botched PAT attempt would keep the Eagles at 28-13.

And with little time left, the Golden Eagles executed a successful on sides kick, but the rally was stopped short on a interception deep in Hollidaysburg territory.

The Tigers would take a knee and finish the game 28-13.