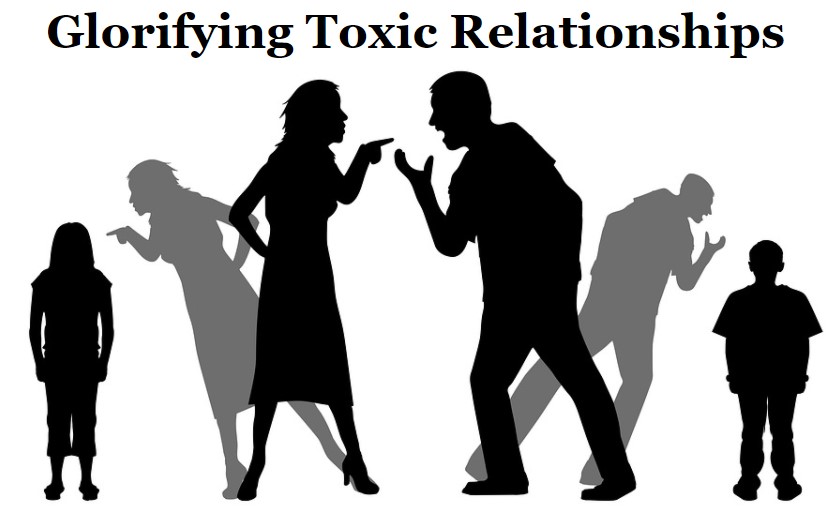 Illustration made by Hailey Vanish

Today's media is beginning to glorify toxic relationships which is causing younger generations to have a mixed perception of what relationships should look like. (Used by Creative Commons License from https://www.maxpixel.net/Man-Dispute-Silhouettes-Woman-Education-Children-4661515)

As teenagers, we imagine relationships filled with romance, love, and honesty with someone who will do anything to make you happy. We want open conversations where we can both express our feelings without being hurt or judged. We want partners who care and want the best for each other.

In today’s media, the concept of healthy relationships has come to a halt as toxic relationships make appearances within books, television shows, and movies. The relationships where one is emotionally, verbally, or even physically abused by their partner are now widespread as the relationships are almost being glorified by the public.

Teenagers in today’s society are watching these shows and reading these stories for the purpose of being entertained, despite the cruelty of what is happening. We no longer watch or read as other teenagers pass notes in class, awkwardly hold hands, or dance in the school gym. What today’s teenagers see is cheating, manipulating, mocking, and abusing others as though it is a common occurrence.

Killing for a Toxic Relationship

In the Netflix series You, Joe Goldberg becomes fixed on certain women and often goes to extreme measures to make the relationships work. In season one, Joe becomes obsessed with Guinevere Beck and feels entitled to her affections, which leads to irrational behaviors like stalking her, spying on her, and killing her ex-boyfriend. In season two Candace Stone, Joe’s ex-girlfriend, tries to bring him down as he zeroes in on his new target, Love Quinn. Later in the series, Quinn ends up murdering Stone to protect Joe and their relationship.

For Quinn to kill to protect Joe symbolically silences the voices of the women who have been stalked or have been in these toxic relationships. It emphasizes the idea of male supremacy and how women are vulnerable under the hands of their partners. The only chance of redeeming this show for women who have experienced something similar is for Joe to get the punishment he deserves – but that is highly doubtful in the media of today.

Glorifying the Lack of Trust

Perhaps you have also watched the Netflix movie After, and the sequels that follow. Many view the relationship between Hardin Scott and Tessa Young as romantic while in reality there are several toxic aspects to it. For one, the couple lacks communication as well as simple trust.

The second movie, “After We Collided,” focuses on Tessa as she receives a life-changing job offer in Seattle. Instead of being happy for her, Hardin guilt trips Tessa. She then questions whether she should give up on the dream altogether and just follow Hardin to London to make him happy. Hardin’s manipulation is difficult to ignore as the guilt-tripping is extremely harsh and overbearing.

As her boyfriend, Hardin should support Tessa’s dreams no matter what. In a healthy relationship, partners communicate with each other and support them. Romanticizing a relationship as toxic as the one between Hardin and Tessa can be damaging to younger audiences. Young audiences will soon view these movies and begin to believe that the behaviors exhibited on the big screen are okay.

In another teenage drama, Euphoria, there are many toxic relationships, but Nate and Maddy’s has always stood out as the most disturbing. Nate’s toxic masculinity and his need for total control fostered an abusive relationship with Maddy that she struggled to fully recognize the extent of.

Nate regularly abuses Maddy physically and mentally while Maddy defends him and tries to protect him when others see her bruises. Maddy seeks comfort in the relationship that she knows because as much as it’s a violent relationship, she also feels certain safeness being with him.

“Euphoria is meant to be realistic. So much of the audience idolize the characters when the point of the show is to point out their flaws. For the most part, people know Nate and Maddy’s relationship is toxic and the director does a good job portraying the horribleness of it, but however I’ve only seen the matured audience seeing this, I feel younger kids could be susceptible to it. Younger audiences should not be watching it in the first place, but they do,” said one student.

In toxic relationships, people stay with their partners because they see the best in them and rely on the good moments they had. In those relationships, a lot of females think they can fix their partner so they stay with them, although there is always a chance that the abuse will get worse if they don’t leave soon. The media needs to address these problematic ideas and help people realize that their relationships are abusive so they can get out of them.

The toxic relationships found in the media have not been limited to PG-13 and rated R audiences.

In the children’s Nickelodeon show, Victorious, a toxic relationship can be seen between the characters of Beck and Jade. Jade can be seen as toxic due to her controlling behavior over Beck. He couldn’t make eye contact with any girl without her jumping to conclusions. In one episode, it was mentioned that in all the years they were together, she never did anything nice for him. Beck is not perceived as the perfect boyfriend either as he allows girls to surround him and often flirt with him.

“When I was younger I thought jade was the crazy one, now I mean she’s not perfect in any way but beck flirts with other people and gaslights Jade causing her to act out the way she does. It is a very toxic relationship on both sides,” said one student.

The relationship within Victorious is a horrible example for young kids who grew up watching the show. Portraying a toxic relationship in a children’s show may cause children to grow up having the belief that actions such as controlling, manipulation, and emotional abuse are completely normal for one to be towards another. Children sometimes enjoy acting like their favorite characters and role models, but if the role models and characters partake in toxic behaviors so do the children.

How Should We Handle This?

Believing abuse is normal is one of the many reasons people stay in abusive relationships. While there is nothing wrong with incorporating toxic relationships within shows, glamorizing them can cause the number of toxic relationships in the real world to increase. Romanticizing toxic relationships is what is truly toxic because writers target the younger generation. Teenagers’ minds are still subject to influence and the wrong topics being glorified can leave a long-lasting opinion to be left in their minds. With being exposed to the wrong perceptions on controversial topics, teenagers can grow up to continue believing that certain actions and behaviors are normal.

“I don’t think toxic relationships on television are a bad thing…they have the ability to spread light on abusive relationships and tell people’s stories that have endured that, but the media portrays them in a good light. They make them seem desirable. I can’t count how many times I’ve seen young kids saying how cute toxic couples in shows are. It’s teaching the younger audience that that type of behavior from your significant other is okay,” said one student.

Media today should show healthy relationships to give today’s generation a real perception of what their relationships should look like. Partners should respect each other’s independence and allow them to make their own decisions without fear of retribution or retaliation. Relationships should be supportive, loving, and understanding with both partners being loyal to each other.

The more toxic relationships are shown and glorified in the media, the more there will be in the real world. People who don’t have experience in relationships might start to believe those behaviors are normal and allow themselves to get treated that way. Society needs to take a stance against toxic relationships and as the first stance, they should stop the glorification of them within the media.