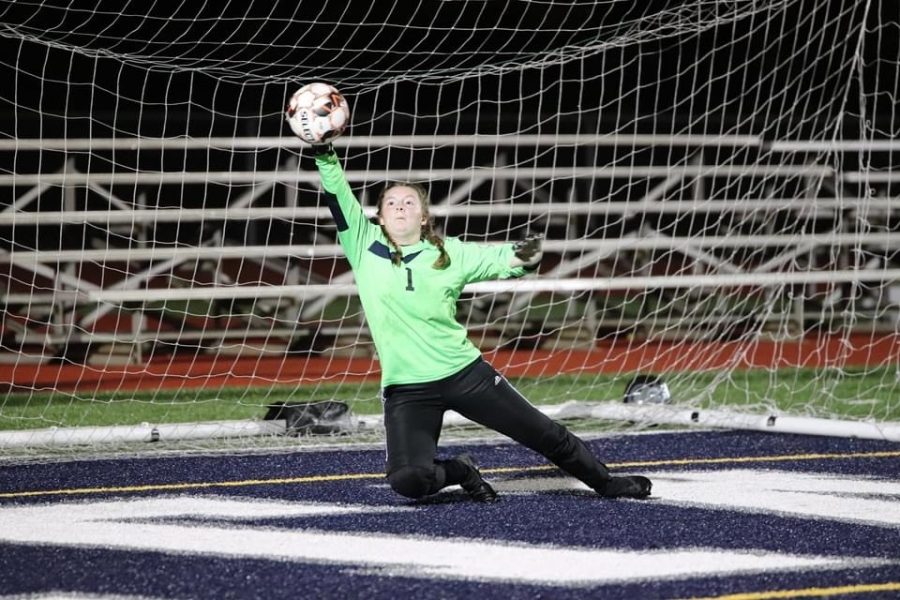 In the first round of the district playoffs, Tyrone played Bellefonte to a hard-fought 0-0 tie in regulation and through two overtimes, before losing in the seventh round of penalty kicks.

The Lady Eagles dominated possession throughout the game and both overtimes but struggled to get the ball to hit the back of the net.

“We had a really good season this year making it to the semifinal playoff game. We have a very good group of talented girls so I hope to make even further next season,” said junior Lindsey Parks.

Conditions were very cold and rainy, which made it hard for the players to keep their footing and possession of the ball. The game was also played on turf, which gave an advantage to Bellefonte. Tyrone practices and plays on grass at home, while Bellefonte has turf on their home field.

The ball remained on Bellefonte’s defending side of the field for most of the game, but no matter how many times Tyrone broke past Bellefonte’s defensive line, they were not able to get their shots to hit the net. Many shots were taken in both the first and second half but regulation time ended with no goals scored from either team and a 0-0 tie.

In the first overtime, Tyrone came out aggressively and shot on Bellefonte’s goal in the first minute. The ball wasn’t able to pass Bellefonte goalkeeper Emily Culp, but Tyrone kept working the ball and looked for more opportunities. Although the Lady Eagles took many shots on goal, there were no goals scored in overtime which led to double overtime.

The game was forced into penalty kicks. Penalty kicks are especially hard on goalkeepers due to it only being one on one and the player has an opportunity to shoot in any of the corners of the net. The goalie has to predict which way the opposing player will shoot while also getting there in time to stop the ball.

Tyrone started the second round with their shot hitting the center of the net, but was blocked by goalkeeper Culp. Bellefonte had the opportunity to score and win. They took the opportunity and scored on a kick to the top left of the net. Tyrone keeper Rayann Walls predicted the way the ball was heading but couldn’t jump high enough to be able to catch the ball. The goal gave Bellefonte the win and sent them home with the chance to play at the championship game against Hollidaysburg.

“The game was one of our most competitive games of the season. We dominated the entire game but just couldn’t get the ball in the back of the net. I am so incredibly proud of how our team competed this year and can’t wait to see what the future holds for them,” said senior Kendall Markley.

The Lady Eagles dominated possession throughout the game and played their hearts out until the last whistle was blown. The future’s looking bright for years to come with only one senior and a lot of incoming freshmen next year.

Although their season did not end the way they had hoped, this season was memorable. Just being able to play in the playoff game against Bellefonte was an accomplishment for the team.

“I’m going to miss the bonds I have made with the team so much. They are truly a second family to me, and the friendships I’ve made through soccer have been amazing,” said Markley