School officials hope that the project will be completed by Thanksgiving 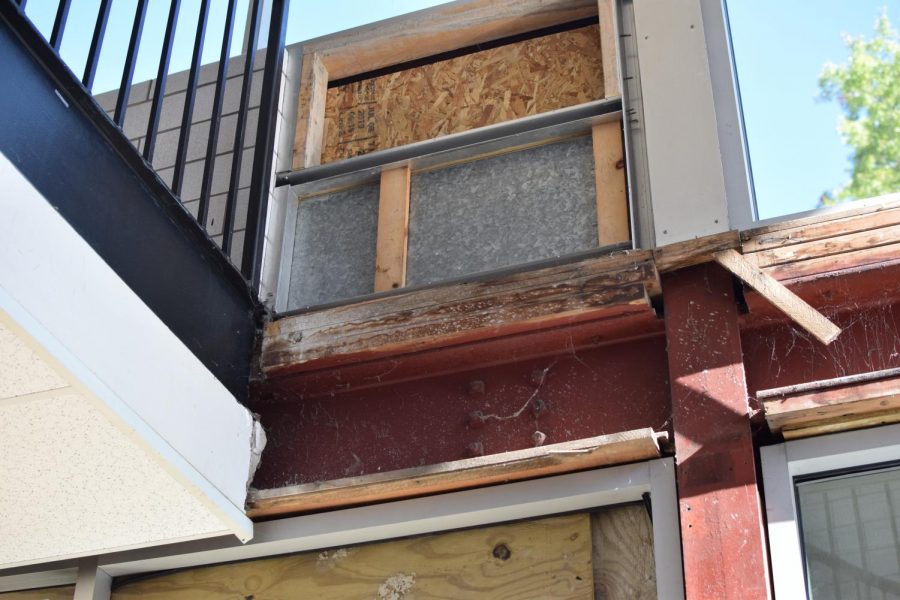 The project has exposed several of the original support beams.

Last year the Tyrone Area School District board approved a $511,356 project to remodel the lobby, stairways, and the front entrances of the high school.

This “Facade Improvement Project” was to be finished by the beginning of this school year, but due to problems with the contractor the district is still left with an unfinished project.

Throughout the lobby and front stairwells, there are gaps and holes in the walls and plywood covering several doors.

“It makes the front of our school look unprofessional. The gaps in the halls are already making it colder in the school. I hope it is finished before winter,” said senior Reagan Wood.

However, according to district officials, there is still no official completion date for the project.

According to Building and Grounds Administrator Jordan Good, the reason for the delay is that the subcontractor hired for the job, Windows Specialties Inc. from Lebanon, Pennsylvania, fell behind schedule and had to be removed from the project.

“There is frustration with the contractor. I believe everyone is understanding that it is actually out of our hands. Our subcontractor would just not show up on site,” said Good.

Good said that the subcontractor apparently had more work than they could handle, and did not make the high school project a priority.

As a result, the administration decided to hire a new subcontractor, Glass Menders of Altoona, with the hope that they will finish the project as soon as possible.

“They have a very good reputation. They do very good quality work, I assume their reputation would hold a lot more value here,” said Good.

Good indicated that the change in contractors will not cost the district any additional money.

According to Good, the project was undertaken to replace the glass wall in the front of the school with a four foot solid wall and to replace several doors and upgrade the windows.

“The lower section of the wall that was replaced with block was in response to school shootings. It is meant to provide a barrier to get down behind and move out instead of having an all glass faced lobby,” said Good.

Some students have questioned the need for the four foot wall.

“I think the decision was made with good intentions, but I don’t think it will serve its intended purpose. I don’t think that it is worth it,” said senior Chris Wilkins.

But Good stressed that preparing for an active shooter scenario was not the main reason for the project. The windows and doors are old and needed to be replaced.

“The [original] glass was single pane and the double doors were wearing out and leaked a lot of air. The new glass [will be] insulated double pane and the [new] doors have a much tighter thermal seal. This was the main driving force for replacement. Since this project meant removing all the glass in the front entrances it allowed us to incorporate a safety feature into the new facade at the same time,” said Good.

However, as the weather turns colder, students and staff are concerned about the gaps and holes in the building and frustrated by the delays.

Good was hired in June following the retirement of former Building and Grounds Administrator Tom Muir, and was not a part of the original decision making process for this project but is now overseeing its completion.

Good is hopeful that the project will be completed by Thanksgiving, but also said that nothing is set in stone.