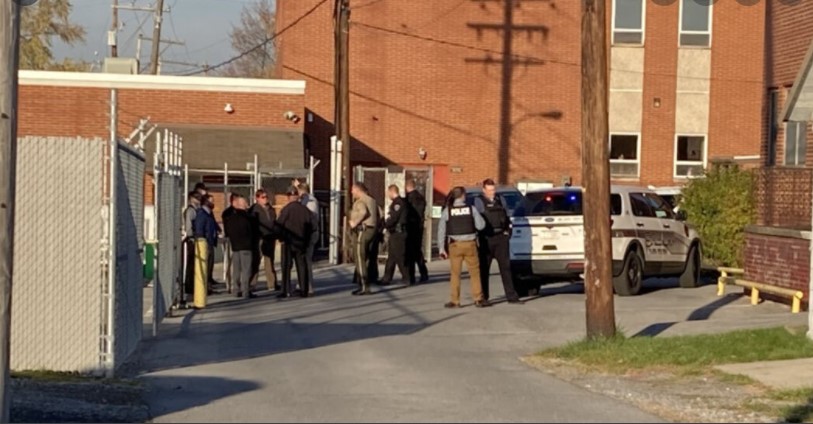 Police gathered outside the Central Court in Altoona after Blair County Corrections Officer Rhonda Russell was killed on November 17, 2021.

Blair County officials announced enhanced security measures in response to the shooting death of Prison Corrections Officer Rhonda Russell in November 2021, but friends and family of Russell are not satisfied with the county’s actions so far.

Blair County President Judge Elizabeth Doyle, County Commissioner Laura Burke, and Sheriff Jim Ott said that anyone entering the Central Court building will be searched and magnetically wanded before being admitted. Weapons and contraband will not be permitted in the building, and items confiscated could lead to arrest and prosecution.

“They can discuss it all they want, but until we see an active investigation into the Blair County Prison Administration, I have little hope that things will change,” said Stephanie Anthony, a spokesperson for Russell’s friends and family. “You can have safety measures implemented, but when you have an administration who doesn’t abide by or follow them, then it won’t make any difference.”

Russell was shot by an Altoona City Police officer on November 17 during an escape attempt by a prison inmate who was being transported from the prison to the Central Court building in Altoona. Russell’s family is asking for a full investigation of the actions of both the prison administration and the police.

Russell’s son and Tyrone native Ricky Reader said that the county has not yet taken the steps necessary to provide a proper level of security for corrections officers.

“Just a few weeks after my mother’s tragedy, they sent an inexperienced corrections officer to Central Court that had little training,” said Reader. “I truly feel that they need to make tremendous changes to try to ensure that this never happens again.”

Blair County Sheriff Jim Ott told the Altoona Mirror that the initial screening operations are a short-term solution and discussion on how to address long-term solutions are also underway.

But the Russell family says they are ready for action now and are not satisfied with what has been done so far.

“We have kept quiet these last few months because we needed our time to grieve. Now is the time for justice,” said Anthony.

On February 8, Anthony and about a dozen fellow supporters staged a public protest in Hollidaysburg to bring awareness to what they say was negligence on the part of the Blair County Prison Administration and Altoona Police.

“I feel that by letting the public know what really happened, they will have no other choice but to make changes,” said Anthony.

The union that represents prison employees told the Blair County Prison Board that the administration did not follow proper procedures on the day Russell was killed.

“There have been protocols in place for a number of years on how to handle these prisoners going to Central Court, (including ones) updated by Warden Abbie Tate that weren’t followed by administration and upper management,” said Dave Cherry, a representative for the American Federation of State, County and Municipal Employees at the Prison Board’s regular monthly meeting on February 17.

At the meeting, union officials asked to be involved in the investigation and discussion of recommendations to improve prison procedures, something that Russell’s family fully supports.

The investigation is still in the hands of the Pennsylvania State Police and according to Russell’s family, they have not heard much about its progress or when it will conclude.

“All we can do is pray that they treat this investigation as if they were in my family’s shoes. It needs to be as thorough as possible,” said Reader.