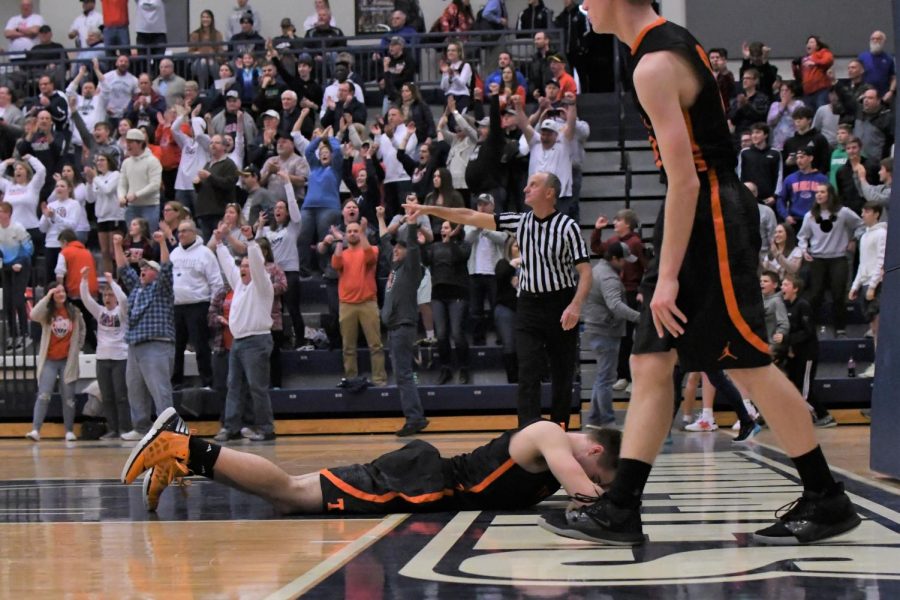 The Golden Eagles boys basketball team ended their season with a heartbreaker in Saturday’s championship game. After leading by nine in the final quarter, Huntingdon managed to comeback and upset the Eagles 49-48 in the game’s final seconds.

“To finish 21-3 we all have a lot to be proud of, we were league champs, we were undefeated at home. The coaches are very proud of the steps the team has made this season, we grew individually as players and the future is bright for years to come” said Tyrone Head Coach George Gripp.

However, the disappointment was evident on the Tyrone side of the court.

Lucas was also a big man on the boards Saturday afternoon, racking up 12 rebounds.

Some of the main stars for Tyrone were held to some very low numbers. Damon Gripp was held to only four points. Landen Dehaas was also held to under ten points on the night.

The Tyrone sideline was in shock after Huntingdon came back in the final minutes of the game with a 10-0 run. Tyrone had 8 seconds to work with after Huntington’s Nick Gearhart clutch 3-pointer.

Junior Damon Gripp dribbled up court and attempted to drive the ball toward the left block when a controversial call ended in a travel call against Gripp leading to the Huntingdon Bearcats taking the ball over and ceiling their road to the state playoffs.

“When you lose a game like that, obviously we are all devastated. We missed some shots, had 2 key turnovers and didn’t get a call at the end. This was our goal at the beginning of the season, and to come up a point short doesn’t sit well with anyone. But the boys played extremely well for the most part, leaving everything they had on the floor,” said Gripp after the game.

The Eagles battled hard the whole season and dominated the majority of their opponents.  They should come back strong next season as the preseason favorites to win the district championship.