Eagle Eye Promposal Contest: You Light up my World 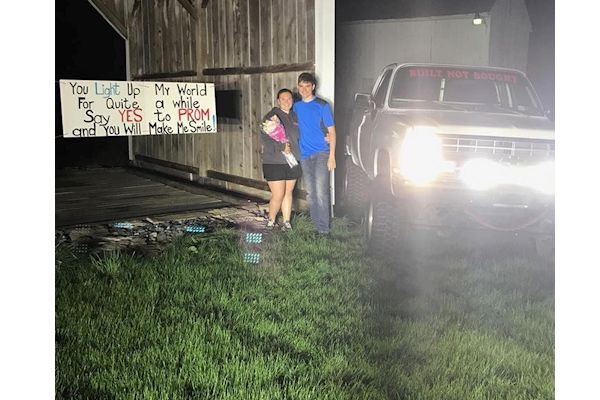 By Brianna Foy and Emily Fusco

When receiving a light up bar as a birthday gift, Tanner Briggs got the idea to prompose to his girlfriend Grace Gensimore. Tanner planned to surprise Grace by driving to a bed and breakfast where a sign asking to go to prom and lights were waiting at an antique weigh shed. Grace received flowers after she said yes and felt very excited to go to prom with her beloved boyfriend. She also felt very special that Tanner used his birthday gift to prompose.

Eagle Eye: Who did you ask to go to prom with?

EE: Describe in detail how you asked them.

TB: I came up with the idea. I then asked the owner of the Bed and Breakfast to use the antique weigh-shed. I made the promposal sign and asked for help, then hung the sign up. That night we drove up to the Bed and Breakfast because “I forgot” to do something. We pulled in with all my lights up to the sign. After she said yes, my friend Josh came to light up and bring her flowers.

EE: Why did you choose this person?

TB: She is smart enough to drive a Chevy truck. I enjoy being with her, and she is my girlfriend!

EE: Where did you get the inspiration to ask?

TB: For my birthday, she bought me a light bar, so I could incorporate the idea with the both of us.

EE: What relationship do you have with the person?

TB: She is my girlfriend

Grace Gensimore: I was told he “forgot” to do something at the Bed and Breakfast so we drove up and he pulled in front of the sign where all his lights were on. Then Josh pulled up with all of his lights on and gave me the flowers.

GG: There was a sign hanging up that said “You light up my world for quite a while say yes to prom and you will make me smile.” That was lit up by all of his lights. I felt so excited and automatically said “YES!”

GG: At some point I knew he was going to ask me, but I didn’t know when it would be.

EE: Why should you win this contest?

GG: It was a great idea that he used a light bar I got him, so it meant something special to the both of us.