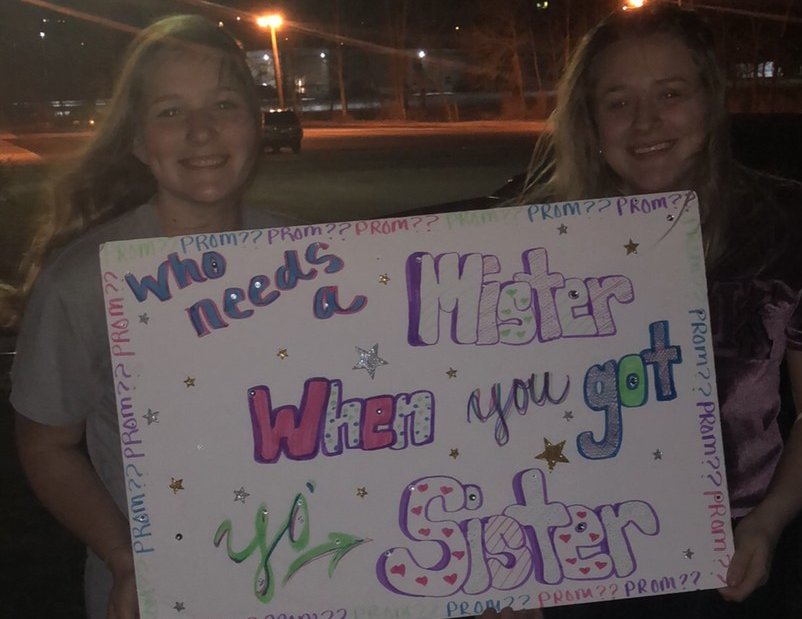 Junior Lexi Kagarise thought the best way to spend her junior prom would be with no one other than her best friend, sophomore, Zoey Hampton. With the help of Zoey’s mom Lexi was able to surprise Zoey when she promposed the other evening.

Zoey’s mother told her that they were going to the Village Pantry to get dinner and when she walked outside Lexi was there with a sign that said, “Who needs a mister when you got yo sister..PROM?”. Zoey had intentions that she was going to go to prom with her best friend but she was surprised because she was not expecting to see Lexi.

Although, Zoey was only concerned about the Village Pantry she was promised she was getting but they happened to have closed at 8. In celebration, Zoey and Lexi got Sheetz for dinner instead.

LK: “I thought it would be the best way to spend my junior prom by going with my best friend, Zoey.”

EE: Give your side of the story. Why do you think they asked you?

ZH: “Lexi and I have been really close for a little bit now and she told me she was going to take me to prom with her.”

ZH: “Well, I thought my momma and I were going to the Village Pantry for dinner so I was excited but I walked outside and Lexi was there with her sign. I was then confused and salty because I wasn’t expecting to see her and I really wanted to go to the pantry, but it was closed. We got Sheetz for dinner instead so it all worked out.”

ZH: “Yeah, because she told me she had to think of a way to prompose to me but then she told me she wasn’t promposing to me anymore. Later Lexi changed her mind again and we went together to get the stuff for her to make the poster. So I knew I was going to get asked just I didn’t know when.”

AL: “We think we should win because this is one of the only few girl to girl promposals we have seen to enter the contest. Plus free prom tickets would be pretty sweet!¨