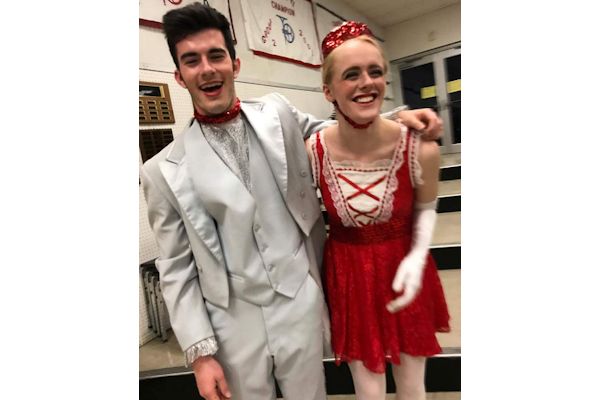 After a spectacular performance in front of a sold out auditorium, there was no better way to end opening night of the musical production Beauty and the Beast than with a promposal based on the show. Nick Vasbinder got his inspiration for the promposal near the beginning of the performance when his fellow cast members where performing a duet. After the show was finished, Vasbinder gathered the entire cast minus Hilari Parsons in the music room and when Parsons entered, the cast began to sing a tune the resembled one from the show. They sang the words “Will you go to Prom with…” and then Nick popped out from within the crowd of people holding candy and flowers singing “Me”. Hilari gladly said yes.

NV: The idea didn’t come to me until we already started the show. I was watching Molly Harris and Tyler Eaken do a duet, and that’s when the idea came to me. I asked my good friend Austin Shuey to spread the word around. Then whenever intermission came around, Hunter Jackson gave me the idea of singing. After the show ended, I asked Paige Umholtz to distract Hilari until everybody was in the band room. Finally, with flowers and candy in hand, Hilari walked in the door, and everyone started singing “Will you go to Prom with – ” to the melody of the song “if I Can’t Love Her”. Then when everyone cut off their singing at the word “with”, I stepped out of the crowd and sang “me”. Thankfully, she said yes.

NV: I chose this person to ask to prom because it was the first night of the musical. It was even better since the musical was sold out, but above all, this person has done so much for me and I wanted to do something special.

NV: I got the inspiration from the song “If I Can’t Love Her” from the Beauty and the Beast musical.

NV: This person is my girlfriend

HP: I think he asked me because he wanted to do something really special and memorable for my senior prom. Plus the fact that the show sold out made it all the better.

HP: I was really surprised and just overall excited! I loved that e found a way to incorporate the whole case and make the occasion all the more special.

HP: I honestly had no idea. I knew we were going to prom together so I didn’t think he was going to do anything, but I was really happy when he did.

HP: I think we should win because his idea was original. It wasn’t just something you find on Pinterest with a pun and a piece of poster board it actually came from the heart.