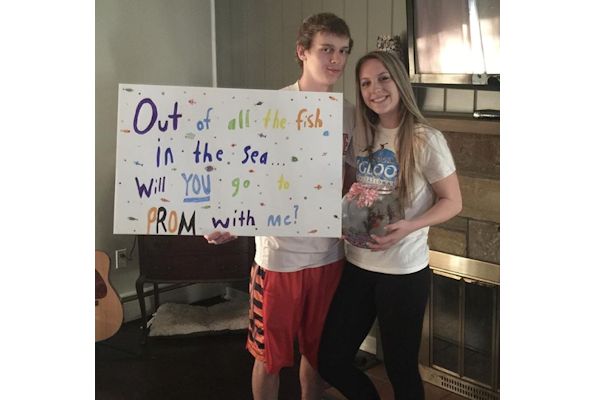 Junior Parker Mitchell found a creative way to ask his longtime girlfriend, Payton Wagner, to prom using her love of fishies. Mitchell bought two goldfish and made a sign that read ” Out of all the fish in the sea, will you go to Prom with me?”. Payton was ecstatic about her new prom date and pets to care for. Unfortunately, this fairy tale doesn’t have a happy ending as one of the fish died four days later. The couple will still be attending prom though!

PM: I made a sign that said “Out of all the fish in the sea…will you go to prom with me?”. Along with the sign, I also bought two goldfish.

PM: She had a fish that died named Pizza and she was really sad when it died): RIP Pizza

PM: She is my beautiful girlfriend 🙂

PW:  I was asked with two goldfish and I was really excited because I love fishies but then I was sad because one died after four days.

PW: Yes because he’s my boyfriend and I told him to ask me

PW: Because we are awesome