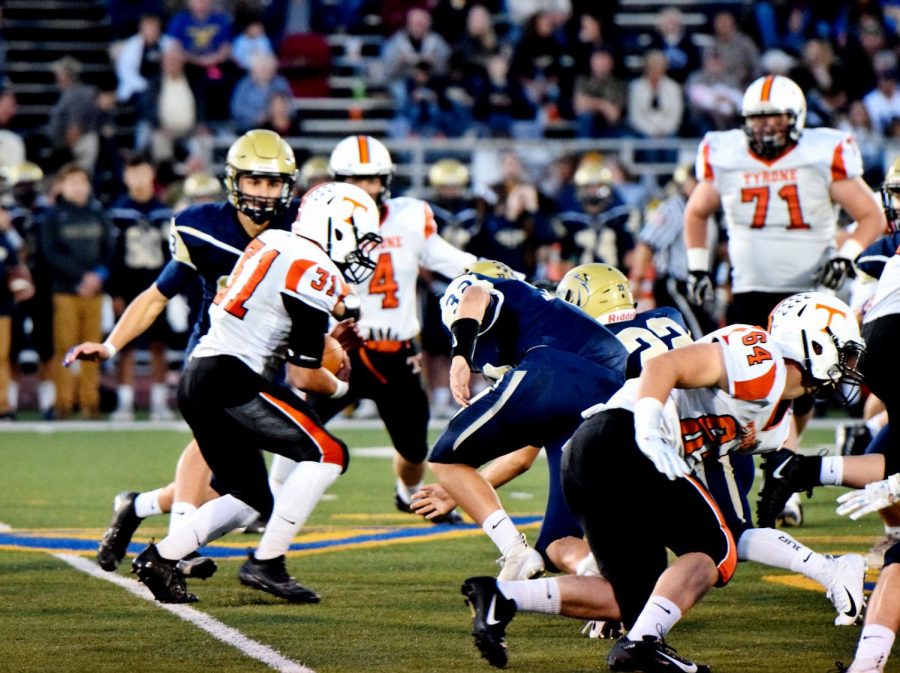 For the second week in a row, on the same BEA turf that the Golden Eagles lost on last week to Bellefonte, Tyrone suffered a crushing 35-0 loss at the hands of Bald Eagle.

The Bald Eagle defense was dominating as Tyrone was held to 62 yards of total offense and a stunning -24 yards on the ground.

Bald Eagle’s offense had a huge first half but a small silver lining for Tyrone was that its defense was able to stop the bleeding after one half and hold the Bald Eagles scoreless in the second half.

But there was no way to sugar coat the loss, and head coach Jason Wilson made it clear that he was disappointed in his team’s performance.

“We need to get back to the basics and execute better fundamentally. There’s a lot of little things that we need to correct. We need better focus at practices and put together a complete solid game of football,” said Wilson.

The game started out evenly as the first 10 minutes of the first quarter was a battle of the defenses neither team budging.

Bald Eagle got on the board first on a 39 yard run with 2:44 left in the first quarter, and after a successful two-point conversion they took an 8-0 lead.

After the first score, the floodgates opened and the Bald Eagle took over on both sides of the ball for the remainder of the first half.

Tyrone came up empty on their next drive and Bald Eagle responded by driving down the field, taking a 14-0 lead over the Golden Eagles after a failed two-point conversion.

The first quarter finally came to a close with Bald Eagle adding a safety with 16 seconds left when the Tyrone snap sailed over the punters head and out of the end zone.

As the Tyrone offense still stalled Bald Eagle struck again with 8:35 left in the half, extending their lead to 22-0.

One of the only bright spots of this game was sophomore corner Damon Gripp continuing his reign of terror over quarterbacks as he added another interception to his total on the season.

Bald Eagle marched down the field one more time before the half scoring yet another touchdown with 2:51 left in the half.

Even when it looked like it couldn’t get worse a Tyrone fumble was picked up by Bald Eagle and taken back 46 yards for a touchdown with 2:30 left in the half putting the exclamation point on a dominating half for Bald Eagle.

Tyrone headed into the locker room for halftime already down 35-0.

Fortunately for Tyrone, things did look much better defensively in the second half.  Tyrone’s defense held strong not allowing Bald Eagle offense to score any more points, but none of that mattered as the Tyrone offense could not get any momentum going.

On an already difficult night for the offense, an injury to Tyrone quarterback Denver Light late in the first half did not make the possibility of any kind of a second-half comeback even less likely.

Light left with a shoulder injury and did not return to the game.

After this disappointing loss Tyrone’s record moves to 4-2 on the season with a 2-2 record in the Mountain League. Tyrone looks to regroup this week, but things will not get any easier for the Golden Eagles as they prepare to take another tough opponent in the Clearfield Bison on Friday in Tyrone.

BEA — Safety, snap from center went out of the end zone; :14