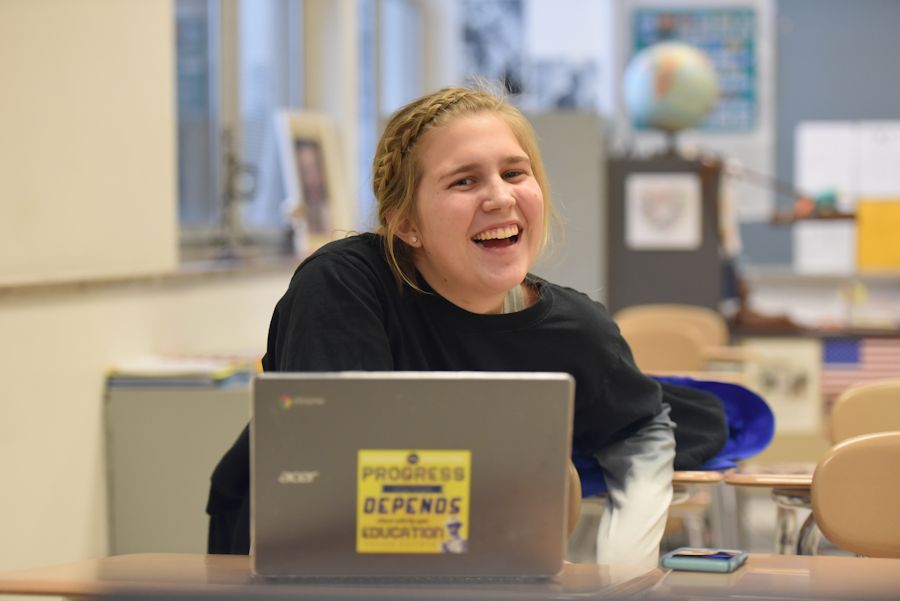 Tyrone junior Chloe Makdad has seen the light of state History Day competitions before, finishing first at the district level the last four years in a row and third at states in 2016, but this year Makdad finally reached the peak. After months of researching, writing, interviewing, and rewriting, her essay earned her first prize in the Senior Paper Division at the Pennsylvania State NHD competition on May 13th 2017.

“The judges received the paper after my interview, but I didn’t think there was any way that I won. I was surprised and pretty excited,” said Makdad.

Despite its name, National History Day is an international competition, with half a million students participating annually to celebrate the Earth’s rich and diverse history. Students can chose to compete in and convey their topics through a number of different mediums, including websites, essays, and project boards.

Her essay follows the theme well, telling the story of Whitfield Diffie and Martin Hellman’s stand against the NSA on a topic that not only applies to all technology users, but also protects the very website that this story is posted on: Cryptography.

The idea for the topic came about because Makdad wanted to research something that not many people had known about. Eventually she settled on Cryptography, and by chance came across Diffie and Hellman’s story and the rest is, as they say, history.

According to the Stanford News, Whitfield Diffie and Martin Hellman are credited with bringing cryptography “from the realm of classified espionage into the public space and created a major breakthrough that enabled modern e-commerce and secure communications over the Internet.”

One of the most interesting things about Makdad’s research is that she was able to personally interview both Hellman and Diffie on their experiences and triumphs, allowing her to describe their hardship in better detail any other source.

“[I contacted them] and within a couple of days, both of them had responded and graciously agreed to answer some of my questions. I’ve never been able to interview the subjects of my research before, so that was really awesome,” said Makdad.

The title of the story, first said by Hellman himself and used as a motif that is repeated throughout, is “God Rewards Fools.”

“I think this quote really sums up the spirit of discovery and problem solving. So many of humanity’s greatest achievements have come from people rejecting the status quo, from being fools…. History’s greatest triumphs haven’t come from people thinking inside the box, and that’s the message I received from that quote,” said Makdad.

Chloe will travel to the University of Maryland of June 11-17, 2017 for the national competition. She will compete against students from all 50 states, Washington DC, US territories, and international competitors.

If you would like to read her state winning essay, you can find it here.