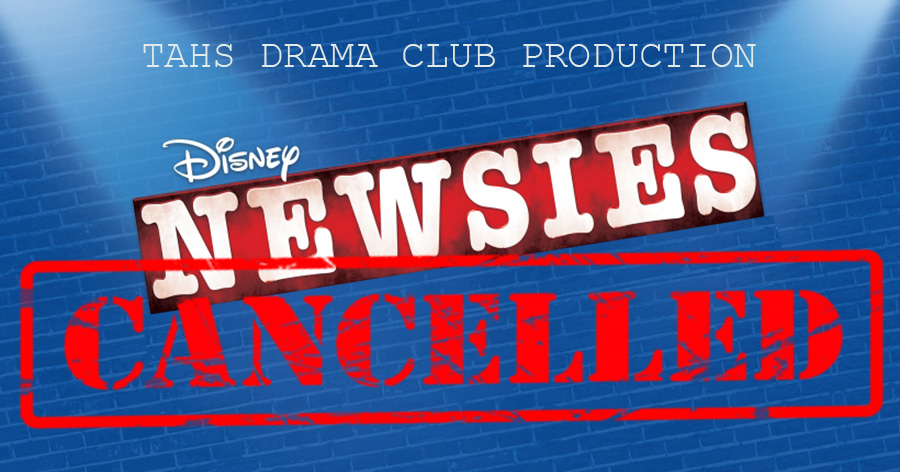 Drama Club Director Laura Harris decision to cancel TAHS’s 2020 production of  Newsies was one of the most difficult things she has ever had to do as a director.

“There are no words to tell you how sorry I am that things didn’t work out and that our community didn’t get to see the amazing show that you were putting together,” said Harris in an email to the cast.

The cast members were also disappointed to learn that the show would not go on this year, but understood that it was unavoidable.

“The cancellation is pretty devastating. We put so much work into the show and it feels as if my senior year will never be complete without it,”  said senior Alexis Umholtz.

Over the couple of months before the closing of school, the cast had been working hard during rehearsals and choreography sessions. They were practicing almost every day with choreography every Thursday. This was a very intense show with a lot of dancing, so choreography was very important.

“[My favorite part was] how much fun we had at the rehearsals and how hard everyone was willing to work on the music and choreography,” said Harris.

“I was most looking forward to our closing show. I wanted to have that time with the people I’ve spent the last four years with at the end of our last high school show,” said senior Nick Vasbinder.

Over the years and months of being together, the cast and directors have become more like family than anything.

“I just love how every cast I’m involved with bonds and connects like a family, ” said Senior Brent McNeel.

While the cancellation of the show was hard for everyone, it is especially hard for the seniors because this would have been their last show.

“I want to thank our seniors for everything that they’ve done as members of the drama club for the past four years. They will all be missed more than words can say,” said Harris.

All of the cast is extremely thankful for Mrs. Harris and all others who tried to make the show happen.

Although it didn’t turn out the way it was supposed to, every cast member has memories that made this experience unforgettable.

“I want to say thank you to Mrs. Harris for trying her hardest to make the show happen, but it is all for the best. Also, to my friends who I have shared the stage with the past four years, I love you all and I know you will do great things,” said Umholtz.

Many senior members of the cast had been asking Mrs. Harris to do Newsies since their freshman year and Harris had been saving it for this year.

The show was originally postponed from April 3rd and 4th to June 19th and June 20th. However, with Blair County still being in the yellow phase at that time, there was no way for the cast to get together and rehearse in the weeks prior to the show.

Because of prior work and school commitments, there were also several cast members who could not do the show on the new dates, and some with substantial parts, so there was no way they could be replaced.

In addition, after checking with the government guidelines, it would have been extremely hard to rehearse even if Blair County would have went green since there are only groups of 25 people or less. This would mean that not all of the cast could be together at one time to rehearse.

For members of the public who bought tickets, program ads, or business patrons for the show, several options are available.

Ticket buyers can let the purchase of ads or tickets be a donation to the TAHS Drama Club. The Drama Club will still have expenses since the show was only two weeks away when Covid-19 caused the closure of schools.

Those who purchased a program ad can also let the ad carry over to next year’s spring musical program. Businesses who select this option will be contacted after the first of the year to see if they would like any changes made to their ads.

Ticket holders can keep their tickets until tickets go on sale for next year’s musical, at which time they can be exchanged for tickets to that show.

Ticket holders and sponsors can also request a refund. To receive a refund, send a letter to:

“[I would like our supporters to know] how grateful I am for the constant support that they show to our students and their love of musical theater” said Laura Harris.

There were 49 members of this years musical cast and each and every one of them made it a truly special experience. The cast members names are posted below: