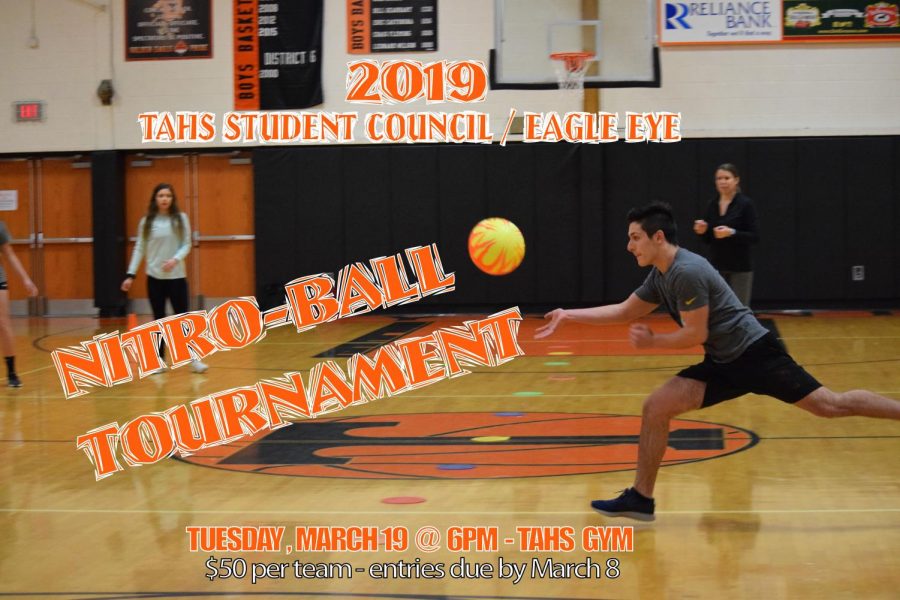 Tyrone Student Council and the Eagle Eye are teaming up to host the first ever Tyrone nitro-ball tournament on Tuesday, March 19, 2019 at 6:00 pm in the Tyrone High School Gymnasium.

As everyone knows, nitro-ball is as competitive as any varsity sport at Tyrone.

So the time has come for students to show their super cool moves and find out who will be the first nitro-ball champions.

All TAHS students in grades nine through twelve are eligible to participate.

We need at least 8 teams to sign up for this tournament to happen, so make sure to enter your dream team as soon as possible.

Each team must consist of a minimum of SIX players, and a maximum of EIGHT players.

Teams can be made up of students from grades 9-12 and can be co-ed or single gender.

All teams are guaranteed to play at least three games.  Winners will move on and a champion will be determined in tournament bracket play.

The cost to participate is $50 per team. The money raised will benefit Student Council and Eagle Eye.

The top two teams will receive trophies and bragging rights as the best Nitro Ball teams at TAHS.

To qualify to play, teams must fill out and return one roster form, and waiver form for each player, signed by both the player and a parent/guardian and a $50 entry fee.

Roster and waiver forms are available outside of room 238 (Mrs. Marasco’s room) and will be accepted from now until Friday, March 8th.

Forms and money can be turned into either Mrs. Marasco in Room 238 or Mrs. Smith in room 231.

Please make sure that the $50 entry fee and all the information for your team is together before turning it in.

In case you need a refresher, here are the official nitro-ball game rules:

The ball MUST bounce off the court before EVERY strike (except the serve).
The same player may not hit the ball consecutively.
Kicking or heading the ball is not allowed.
Blocks are illegal as the ball must hit the ground before every strike.
The ball can be struck with one or two hands.
Rulings by the referee are final and may not be appealed.

Teams will score a point when:

GOOD LUCK AND WE HOPE TO SEE YOU ON MARCH 19!