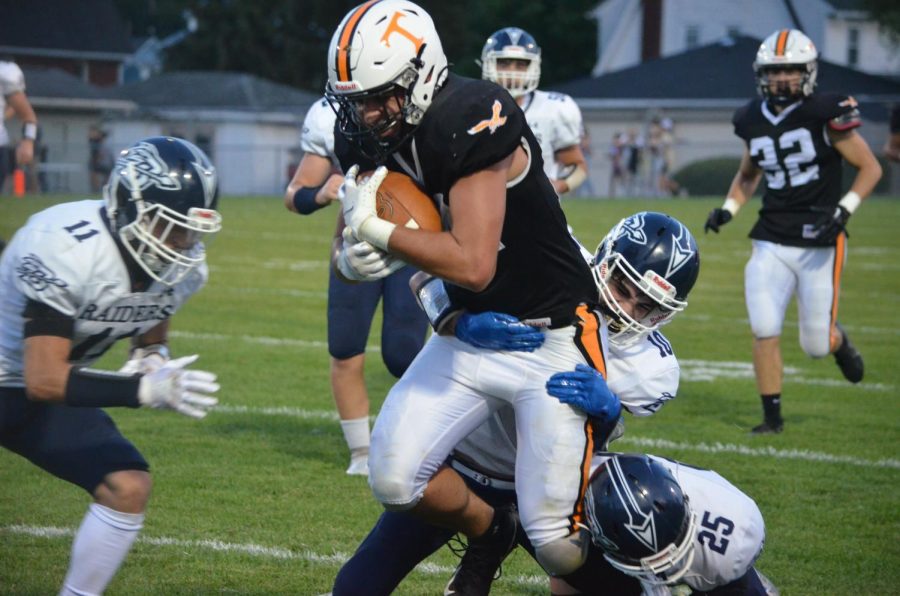 “Put the JVs in” is a phrase that probably hasn’t been uttered on the Tyrone sideline in several years.

But after taking a 30-point lead into the fourth quarter on Friday, the Golden Eagle backup squad finally got some well-earned varsity game experience, sealing a 30-0 shutout win over the Brookville Raiders.

It was Tyrone’s first shutout at Gray Field since the 2015 season.

“It felt good to help the team win. We knew Brookville was going to try and run the ball on us and the defensive line did a good job to shut that down,” said senior wide receiver/defensive end Ross Gampe.

Coming off last week’s Eagle Eye Athlete of the Week performance, Gampe put on another highlight reel show on offense, hauling in 6 receptions for 100 yards and two touchdowns.

Gampe isn’t just an offensive specialist though, he was also a big part of the stellar defensive effort that stopped the Brookville rushing attack.  The Tyrone defense held Brookville to just 73 yards rushing and 86 yards in total offense, on their way to the shutout.

Despite their success, penalties were an issue for the Golden Eagles for the second week in a row.  In their first drive of the game, the Eagles found a way to convert from 2nd and 35. The opening drive ended with a two-yard Brady Ronan touchdown run.

Tyrone’s defense ended up being the key factor in this win over the Raiders. The Raiders were also held to only 5 first downs and the Tyrone defense contributed with nine points of their own.

Along with a safety as a result of a high snap, the Golden Eagle’s defense scored on a Dravyn Crowell interception.  Crowell was able to navigate 85 yards on his interception return for a touchdown, cutting through Brookville’s entire team on his way to the end zone.

“When I first caught the ball I was filled with energy, and if it wasn’t for Nathaniel Patterson’s block I wouldn’t have returned it for a touchdown,” said Crowell about his memorable pick-6.

Tyrone seems to be on the right track to building a new culture of winning. Tyrone will host Philipsburg-Osceola this Friday at 7 pm at Gray-Veterans Memorial Field.