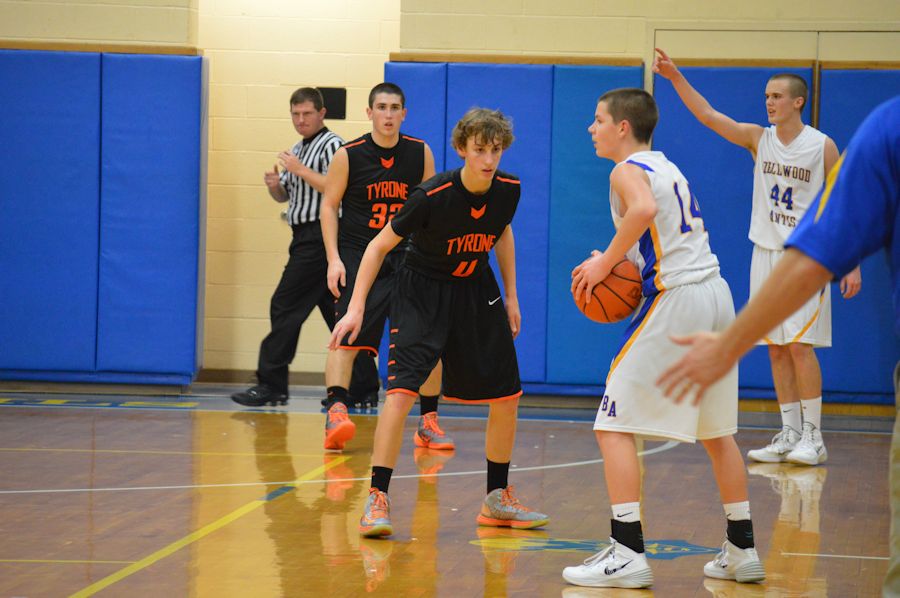 Senior Blake Brooks (foreground) and Junior Anthony Politza (background) will take the court for the Eagles this season.

The 2014-15 varsity basketball season is under way and practice has already begun.

Eagle Eye reporter Ryan Stringer got a chance to have an interview with Tyrone Head Basketball coach George Gripp.

Eagle Eye: You lost a lot of senior leadership last year in Dalton McKeehen, Brandon Gripp, Jordan Miller and Erik Wagner.  Do you have any uneasy feelings about the upcoming season?

Coach Gripp: No, I feel good about the guys coming back. They have played together since they were in grade school.

EE: When’s the first game of the season?

EE: How is the outcome of last year’s early exit from the post season going to effect the upcoming season?

CG: I think it motivated us this past off season.

EE: What is the team going to have to prepare for to succeed in the upcoming season?

CG: Each team is going to put up new challenges for us this season.

EE: What team posts the biggest threat to the team this upcoming season?

CG: Bellwood.  Nathan Davis will be a premier scorer for them this season. And of course the Holiday tournament with Chestnut Ridge and Penn Cambria.

EE: Do you have any goals for the upcoming season?

CG: We want to win the Mountain League, win Districts and advance as far as we can in play-offs.

EE: What is going to be the biggest difference for this season compared to last.

CG: Replacing the leadership our seniors had last year.

EE: how many years have you been the head basketball coach here at Tyrone?

CG: This will be my Ninth Year.