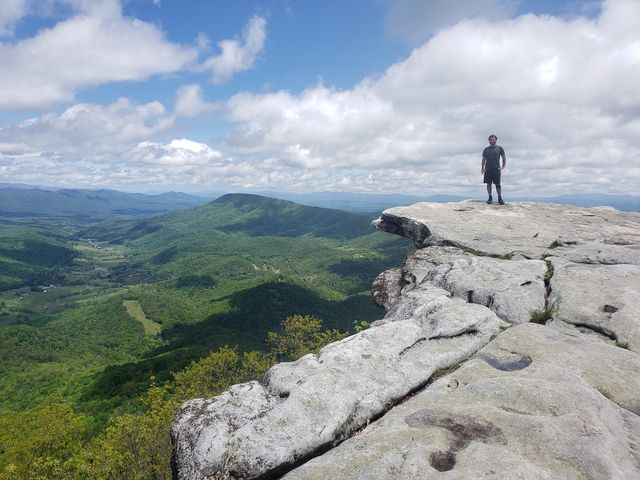 Givler standing at the edge of a rock overhang in western Virginia.

Tyrone alum Shawn Givler found a love of nature and hiking as a young Boy Scout in Bald Eagle Troop 103. When he was 15 he and his friends would joke about hiking the trails full time when they retired, but the joke became reality last year when Givler accomplished one of the most famous hikes in the world: a non-stop thru-hike of the legendary Appalachian Trail.

Givler’s first steps on the Appalachian Trail (AT) came in 2018 when he hiked some of the most iconic features of the trail in western Virginia: Dragons Tooth Rock,  McAfee Knob, and the Tinker Cliffs.

It was on that hike that Givler fell in love with the stunning scenery on the AT.  Givler also met two elderly thru-hikers on that trip who shared their wisdom and encouraged him not to put off his dream of hiking the entire trail until retirement but to do it now when he is still young and energetic.

“So I decided that in 2020 I was going to give this a shot,” said Givler, “because later in life I wanted to be able to say I tried to do this rather than I wish I had done this. The motivation to stay on at first was this is my dream, I’m going to do it and to reach Mt. Katahdin.”

As the rest of the country was plunged into forced isolation due to the pandemic, Givler’s 2,193-mile journey to Mt. Katahdin began at the trailhead in Georgia on March 10, 2020.

Most hikers dream of making the entire trek is never realized. Each year, thousands attempt a thru-hike, but only about one in four make it from Georgia to Maine. Since the trail was established in 1936, only about 20,000 total hike completions have been recorded by the Appalachian Trail Conservancy.

“I wanted to quit three separate times,” said Givler, “and each time I had to adapt and change my motivation slightly. Finally, after the last thought of quitting in New York, I realized that while finishing the trail was a huge goal of mine, it wasn’t the main reason for me being out here. I came out for the experiences and the journey as a whole and after I realized this it made it a lot easier to stay on.”

Thru-hikes can take as long as a year, but most successful hikers complete the trek in about five to seven months.

“When I started I knew that I just wanted to finish. I wasn’t too concerned with how long it took. It ended up taking me five and a half months to finish and I am happy with that,” said Givler, “once I was home for a week, I wish I could’ve dragged it out for another week or so.”

The terrain on the Appalachian Trail is mountainous for its entire length, with an elevation gain and loss equivalent to hiking Mt. Everest from sea level and back 16 times. Flat or smooth sections seldom last long, and the trail is often rocky or filled with roots or mud. However, for Givler the physical demands of the hike were not as difficult as the mental aspect.

“You would think that I would have done a lot of physical training beforehand, but I didn’t. I did the treadmill a few times but it was boring so I stopped,” said Givler, “People in a lot better shape than me have quit early on. So I figured no matter what shape I started in it would improved the longer I was on the trail. In the end, I would say the trail was more mentally challenging than physical.”

While often difficult, Givler learned many valuable life lessons during his five and a half month adventure, which ended successfully at the summit of Mt. Katahdin in Maine on October 15, 2020.

“I left a lot of myself on the trail and brought a lot of the trail back with me,” said Givler, “It was a life-changing journey.”

One of the things that stood out to Givler was how the marvelous natural beauty of nature is often stained by human carelessness and materialism. The experience has led to some changes in his own life.

“I’ve become a lot more aware of how much trash I produce while being home and I am working on producing less waste. I lived out of a backpack for almost six months with minimal possessions. While I won’t become an extreme minimalist I will definitely be getting rid of some stuff,” said Givler.

Another thing he learned is that in nature you can control very little, so you must prepare for what you can and just endure what you can’t. To get flustered trying to fix what you can’t is just a waste of time and energy, and to achieve any goal you must persevere through difficulties.

“Embrace the suck,” as the motto of thru-hikers on the trail goes.

Givler is taking some time off the trail right now, but he is definitely not done backpacking.

“I have a list of shorter trails I’d like to do,” said Givler, “While doing another long trail is not a main goal of mine right now, I’m definitely not ruling it out, but I’m looking forward to hiking a lot of shorter trails over the next couple of years.”

Today Gilver is back to his “normal” life, working as a welder in Hollidaysburg. In his spare time, he plans to continue volunteering for various groups and further his personal goals, but thanks to his Appalachian Trail hike, he has a new outlook and determination in life. He also plans on devoting time to trail maintenance as he was astonished by the amount of garbage that littered the trail.

“My life goals have changed. Some of my views have also been reinforced from this trip I’m still processing the trip and I know a lot more of me will probably change,” said Givler.